While the 10 design best practices for Azure applications has been around for a couple of years, it’s always nice to revisit periodically. Included in the list are: 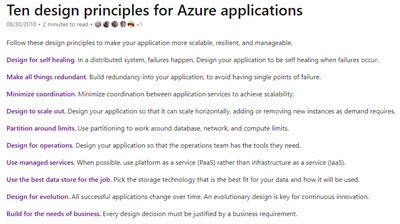 There are quite a few different mocking libraries in .NET. Moq and NSubstitute seem to be by far the main ones I hear that developers use. I've used both of these in different projects, and really like them both. Whilst my preference leans towards NSubstitute, I'd be happy using either. Out of interest, I posted a Twitter poll to see what other people preferred, and the results and replies were really interesting!...

What's your favourite mocking library for .NET and why? (reply for 'other' - Twitter didn't allow enough poll options)

The winner of the poll is clear - but interestingly, a lot of the replies indicated that they used Moq just because it was the most well known / used, and they hadn't tried anything else. There was certainly a lot of love for NSubstitute in the replies, commenting that the API is much cleaner.

I thought it would be interesting to compare some of the leading libraries like for like. So I picked the top three in the poll - namely, Moq, NSubstitute, and FakeItEasy. And I'll go through some code snippets for some of the more common requirements of a mocking library. Note that I can't possibly cover every thing in this blog post, but I'll focus on the features I find myself mostly using.

But first, what does a mocking library actually do?...

What is a mocking library?

When writing a test, quite often you want to only test one particular class and method. But that method might call a dependency that calls into a database, or calls an external service. When writing an integration test, you may want to include those dependencies in your your test - perhaps using a real database span up in Docker, or an in-memory database. But what if you're only writing a unit-test (or the integration can't simulate a particular dependency)? How do you call the method you want to test, without it calling into the dependency and therefore making that database call?

Quite often in .NET codebases, you'll quite often see classes implement an interface - especially those which call into databases or make external API/service calls. For example, you might have a class called EFStockChecker which has Entity Framework code that talks to a database to check stock level. This contains implementation details - ie. it uses the Entity Framework library. This might then implement an interface called IStockChecker.

It is this interface that the rest of the codebase ideally should use - not the concrete type (implementation). The key point here is that the interface has no concept of Entity Framework, or whatever database technology we might be using. All it does is describe the intent. This is known as dependency inversion. When programming in this manor, your business logic isn't concerned with the implementation details of its dependencies. It also means that those dependences are really easy to replace with another implementation when testing.

Let's continue with the IStockChecker example...

Nothing in the above interface indicates a database or database technology. It's just about the requirement, not how that requirement is fulfilled.

Then I might have some code in my business logic that does this...

A mocking library allows you to simulate an interface or abstract type's implementation. You instantiate a 'mock' object of the interface, and tell that mock object what it should return if a method/property is called against that mock. You can also assert that a method/property was or wasn't called.

The basic scenario we'll be using as an example

Let's start with a very simple scenario. Imagine we're testing the above-mentioned ProcessOrder method. Two interfaces are injected into the constructor. The implementation of both of them call out into a database or API (but we don't care about the data source or implementation), as we're not testing this. We only care about the logic in our ProcessOrder method. Eg. How does our ProcessOrder handle the having stock vs being out of stock.

Below is an example test to ensure that an order isn't created if there's not enough stock (using the Moq mocking library)...

As you can see, the dependencies are mocked out. The real implementation would have called out to a database, but the class we're testing doesn't know or care about this - it just cares that whatever "IsProductInStock" is, we get a boolean back. It doesn't care where that comes from, as that's not it's responsibility. What is it's responsibility is that if IsProductInStock returns true, the class we're testing will execute ProcessOrder. And likewise, if it returns false, it does not execute ProcessOrder.

The above example shows how simple it is to tell the mock object to return false if IsProductInStock is called. This bit is just like a stub, but created for you by the mocking library.

You can also see how we can leverage the mock to verify that CreateOrder was or wasn't called. This bit is like a 'spy', but again, done for you by the mocking library.

(for a description of the different types of test-doubles - eg. dummies, fakes, stubs, spies, mocks - Martin Fowler has a post with a short description of each).

In fact, on the NSubstitute homepage, they even try to move away from these specific definitions, and state: "Mock, stub, fake, spy, test double? Strict or loose? Nah, just substitute for the type you need!".

Okay, now we know what a mocking library does - let's move onto some syntax comparisons...

Mock creation and simple 'Returns' Setup with no parameters

Let's start with how we create a mock, then declare a return value for a method or property in a mocked object...

NSubstitute certainly seems the cleanest here, not requiring .Object or a .Setup call and lambda. Note that Moq also has another syntax, where you don't need to use .Object to get at the mocked object, but if you do this - you have the inverse problem, where you have to do Mock.Get(myMock) to do any setup.

Moving forward, I'll omit the mock instantiation and the SUT call for brevity.

What about if your method takes parameters? Eg, we know our IsProductInStock method does take a 'sku' parameter...

This is very similar to the previous example - you just specify the parameter value when setting it up.

'Return' Setup regardless of parameter values

And what if your method takes a parameter, but you don't care what values are passed to it by the code you're testing?...

They all have similar syntax here. Moq uses It.IsAny<>() syntax, NSubstitute uses Arg.Any<>(), and FakeItEasy uses A<string>.Ignored. In NSubstitute, you can also use ReturnsForAnyArgs and the parameters will be ignored. In the above example, I've used the default keyword when doing this to make it more clear that these values are ignored - I could have put "", or any other value, but I think using default makes it more clear.

Quite often you want to have tests testing how your code handles a dependency throwing an exception. Mocks allow you to simulate exceptions being thrown...

All of these are very similar to their Returns counterpart. Just replacing Returns with Throws.

Verifying a mocked method is or isn't called

Another really useful feature of mocking libraries is that you can spy on whether a mocked method was called or not. We saw an example of this in the GivenInsufficientStock_DoNotCreateOrder code snippet earlier in this post, where we verified that CreateOrder wasn't called when there was insufficient stock.

I've included a few examples above showing how to check for different numbers of calls to a mocked method. This particular method I've verifying has no parameters, but all the libraries support verifying the a call was made with specific parameter values, or any parameter values.

I certainly haven't touched on all the functionalities that exist in mocking libraries - but rather focused on the features I tend to mostly use. There is plenty of other functionality - eg. working with events, verifying the order of method calls, etc, etc. If there are any comparisons or examples you feel really belong in this post, please do let me know.

The aim of this post isn't to say one library is better than another, as when it comes down to it, they all pretty much do the same thing. The purpose of this post is just to provide a side-by-side comparison of some of the syntax, to hopefully give the you a feel of what mock creation and setup looks like across these different libraries.

WinUI and Windows Terminal have a strong relationship that goes back to the origins of Windows Terminal. This blog post goes into the history and architecture of how these two technologies came together.

Single Instruction, Multiple Data (SIMD) units refer to hardware components that perform the same operation on multiple data operands concurrently. The concurrency is performed on a single thread, while utilizing the full size of the processor register to perform several operations at one. This approach could be combined with standard multithreading for massive performence boosts in numeric computations.

The future of .NET Standard

Since .NET 5 was announced, many of you have asked what this means for .NET Standard and whether it will still be relevant. In this post, I’m going to explain how .NET 5 improves code sharing and replaces .NET Standard. I’ll also cover the cases where you still need .NET Standard.

Lately I have been dipping my toes into unmanaged programming with C#. The goal was to improve the performance of some data structures that I have been working on. I thought that, maybe, I could improve the performance of them by using some unmanaged code. I noticed in the profiler that a lot of the time was just wasted on allocating memory and my initial thought was that this might be faster if I allocate my objects per Marshal.AllocHGlobal instead of good old new().

I don't know about you, but reference conflicts in .NET led me to tears multiple times. I like to deal with logical challenges, software design, and performance. Not dependency issues and strange assembly load conflicts.

C# Developers are in demand on Vettery

Vettery is an online hiring marketplace that's changing the way people hire and get hired. Ready for a bold career move? Make a free profile, name your salary, and connect with hiring managers from top employers today.

Advocate for Women in Project Management

I'm excited to share this conversation with my friend Elise Stevens. Her work advocating for women in project management is an inspiration to me personally, and the insights she shares today are helpful to both men and women.

Learn more about Elise at elisestevens.co.

Join Us for our Virtual Project Management Training Program!

Learn how to improve your ability to lead and deliver! Join us this fall for the same project management program we deliver in-house at organizations around the world! Learn more at PeopleAndProjectsPodcast.com/learning. Use a coupon code of VirtualPM20 to save $150 USD on the entire program!

I hear from listeners almost every day and I love it! How about you and I connect on LinkedIn? Go to https://PeopleAndProjectsPodcast.com/LinkedIn and Follow me (I've maxed out the connections but if you Follow me, I'll Follow you back!)

Also, all of our other workshops and keynotes are available in a virtual format. Whether you have a live or virtual event, we can help you invest in your team. Learn more at https://i-leadonline.com/keynotes. Thanks!

Thank you for joining me for this episode of The People and Projects Podcast!